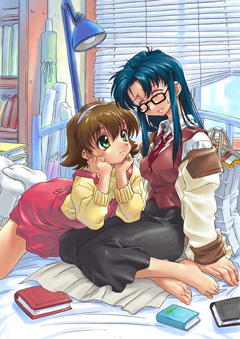 Read or Die takes place in an alternate history world where the British Empire has remained a major superpower. The Empire’s continued existence is guaranteed by the British Library, an external intelligence agency working within the actual British Library and its Special Operations Division (the British Secret Intelligence Service, more widely known as MI6) is also often mentioned, despite Kurata’s editors (erroneously) telling him it no longer existed.

The series follows Yomiko Readman, also known as “The Paper”, a superhuman agent of the Library’s Special Operations (possessing a “double 0” certification that denotes a “license to kill”, as in the James Bond series, although she rarely invokes it). In both the novels and manga, her adventures alternate between doing missions for the British Library and helping young novelist Nenene Sumiregawa.

Only the first novel and first manga have similar stories, involving rescuing Nenene Sumiregawa from a vicious kidnapper. Otherwise, the novels, manga, and animated versions of the stories have divergent plotlines. While characterizations are usually consistent even when storylines are not, some characters have different origins in different versions of the story, or do not appear at all. Still, it’s mostly an ongoing story told through different media from the novels to the animated series so far.