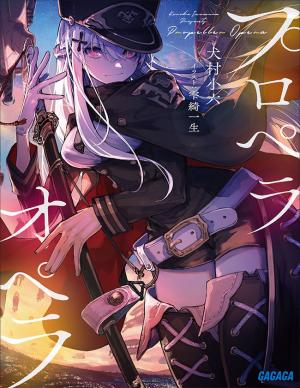 A beautiful girl captain and a genius general counselor, to the battle of the fleet in the sky!

Hinoo, an island nation in the Far East. The first princess of the imperial family, Izaya, is 18 years old.

She is, however, also the captain of the flying destroyer “Ibuki”. The crew, all of whom would give their lives for Izaya, are her biggest fans!

The main character, Kuroto, suddenly boards the Ibuki as one of Izaya’s subordinates. The son of a member of the imperial family, Kuroto was a childhood friend of Izaya’s. One day, however, he caused the worst incident against Izaya and was stripped of his imperial title, and fled with his family to the enemy country of Gameria. “Why is Kuroto here now?”

“I’ve come back to protect Hinoo from the monsters that run Gameria,” Kuroto declares. At the same time, the country of Hinoo has decided to start a war with Gameria, who is trying to take Hinoo for themselves with money and force. Izaya and Kuroto drive the “Ibuki” and challenge the world’s most powerful flying fleet of the superpower Gameria to a decisive battle!