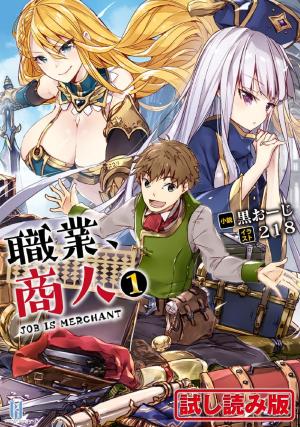 When the heroes announced the start of their journey to defeat the Demon Lord, it caused a great commotion. Amidst all this, a merchant tries to take advantage of the opportunity to make a profit.

On the way to Andersen, a town where people, goods, and money gather, a female warrior arrives to save the merchant from a gang of thugs.

Seeing this as a business opportunity, the merchant immediately begins negotiations with the warrior. He tries to sell her an expensive blue dragon sword.

However, the female warrior has no money, and so she proposes to fight a duel with her own body on the line for the blue dragon sword.

No way. There is no way that a weak merchant can win against a strong female warrior!

However, the female warrior’s body is voluptuous and sensational.

“Will you accept the duel?”

Then the words spill as if it came from the merchant’s loins.

And so begins the merchant’s journey, full of feminine woes, all to secure huge commissions! This is a full-length adventure fantasy story centered on a traveling merchant, with female warriors, priestesses, sometimes female students, Heroes and even Demon Lords joining the action!