Picked up a Scammer Rabbit 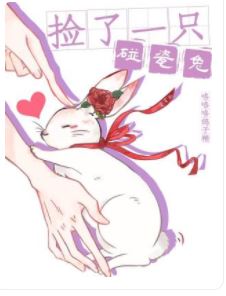 When An Xingzhou ran home in the downpour, he was violently scammed* at the street corner by a rabbit that fell from the sky, hitting his chest directly.

*T/N: This refers to a very specific scam—the scammer demands compensation from the victim after creating an “accident”. (In this case, the “accident” is the bunny bumping into An Xingzhou.)

His heart almost stopped beating from the slam, and he hid under the eaves and held up the rabbit in front of himself.

Pinkish white, it was extremely small, soaked, and trembling.

An Xingzhou, in a rare act of kindness, carried the soft, weak, and helpless rabbit back home. He didn’t think that this rabbit could speak human, opening its mouth to call him “wife”.

An Xingzhou: This is absurd.

Afterward, the rabbit became human, handsome, confident, and elegant. But as soon as he opened his mouth, he exposed his true nature: Wife, hurry and rub my little head.

And An Xingzhou was forced to rub it: the rabbit would cry whenever he took back his hand and turn back to its original form to rub against him in his lap.

After An Xingzhou rubbed it perfunctorily for several consecutive days, that rabbit sat in his lap and became human with a bang, hugging him and shouting “Wife, do you not love me anymore?!”

An Xingzhou looked at the live stream chat, which had blown up: F*ck, I’m live streaming!

The bunny bun is the gong, a soft, cute, clingy crybaby that knows how to act spoiled.