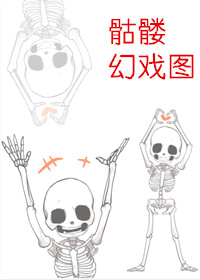 It seemed as if Lin Banxia was being targeted by something strange.

He was alone, but the home was full of strange noises; banging closets with nothing in them, dripping taps with no water, and strange chewing noises outside the window.

He woke up suddenly, and when he opened his eyes, he saw a skeleton as white as snow lying on the ceiling of his house. It turned its head, grinning at him with a brilliant smile.