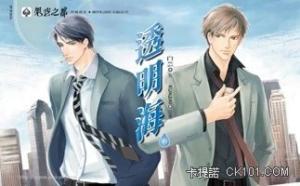 When his eyes first landed on Ling Fei, Ouyang Ran’s intuition told him that as a rookie, he was too arrogant and despotic and required more practice to hone his skills.

When his eyes first landed on Ouyang Ran, Ling Fei’s intuition told him that although the man was his superior, he was nothing more than a rich second generation born with a golden spoon in his mouth.

Both of them did not see eye-to-eye with each other and their personalities were completely incompatible. Just like a meteor colliding with Earth, the sparks that flew whenever they clashed only served to deepen their enmity towards each other.

But in a Futures trading company where the atmosphere was tense and strained, everyday felt as though they were dancing on the tip of a blade. Just one careless move was enough to break one apart.

So, they couldn’t afford to have any internal strife. If they both wanted to win, they could only choose to cooperate…

When a greenhorn lion cub encounters an aggressive animal-tamer with ample experience, who will end up being tamed?