On the Same Boat 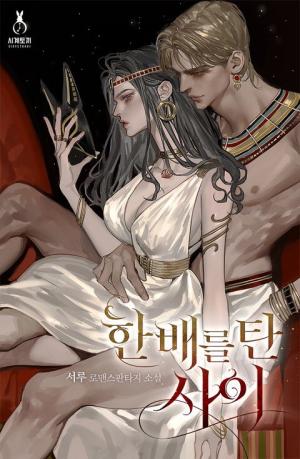 The acting of the villain who was crazy in love was now over.

Lacey’s plan to run away from everything and set off in search of freedom had been perfect, at least until the moment when she was supposed to be paid.

Because what Lacey held in her hand was not a check, but a wanted leaflet with her face on it.

She had no time to feel the tingling in her head after her client double-crossed her. Lacey had to leave the country in a hurry, so she took advantage of the rain to sneak onto a strange ship.

Is she a guest for the night, or is she stowing away to escape?

She met Khalid, the crown prince of a foreign land, who had been her enemy during her villain life…

“Since you have accomplished the role of the villainess, you can be the bride of the century, right?”

“The role I want for you to play is simple.” Leaning against the window, he smiled. “You, who I brought from an exotic country, fell in love with me at first sight.”

He raised the corner of his mouth to Lacey, who was stood frozen. With just that look in his eyes, he closed in onto the frozen Lacey.

“I look forward to your acting that is convincing to anyone.”

Instead of the villain’s mask, it was time to use a white veil.

“While we’re on it… I’ll tell you when you’ll get on the other ship.”

Looking at her, he slowly licked his lips.

“A boat other than this boat.”

Her gaze stopped in one place. Lacey realized it belatedly and groaned. It was too early to say that he could eat using his desires.