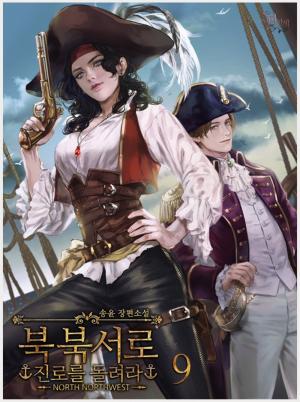 ‘Lil Schweiz’, a famous pirate in the southern seas.

While on a smooth voyage, shocking news fell upon her.

“The Admiral is coming.”

Despite the hot weather, chills ran down her spine. Lil took her eyes off her hands and looked up at Alain, the boatswain.

Not that she didn’t hear him, but she wanted to check again.

“The Admiral of the Peninsula! That madman! Admiral Retiro!”

That infamous admiral, known for skinning the heads of pirates he captured and throwing their limbs as food for the cannibal fish, the one with an eccentric and bizarre reputation will come to the South.

‘It will be for the best to not cross his path. We should get out of here before he arrives!’

But there’s one thing that Lil doesn’t know.

[I, Lil, are notifying you, Ed, that you’ve been punished respectfully according to the Sesbron etiquette.]

“I’m glad I have a role in this interesting play.”

Ed looked briefly at the sun that penetrated the great sails of the mast. The horizon soon became covered in several ivory lights.

A marine romance fantasy between a pirate captain and the admiral!