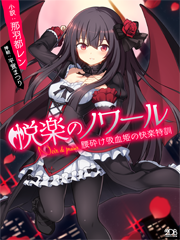 When Eiji, an ordinary university student, woke up in the dead of the night due to suddenly feeling a weight on his body, the scene of a young, peerless beauty possessing jet-black hair straddling onto him came to his view.

Eiji, who had closed his eyes from fear, felt a stinging pain from his nape; he thought that this was the end, so he resolved himself for the incoming death.

But after some time passed, he became suspicious of the never-coming death, so he opened his eyes only to see the appearance of a fainted young girl whose private place was gushing out nectar fluids.

Well, what will you do in this kind of situation?

There’s no need to even ask. It’s a man’s shame to not eat what is offered to him.