My Girlfriend Cheated on Me With a Senior, so I’m Cheating on Her With His Girlfriend (LN) 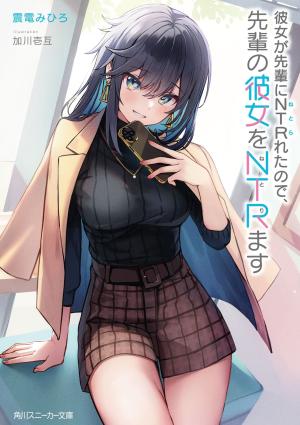 “Touko-senpai! Please have an affair with me!”

“Calm down, Isshiki-kun… I won’t be satisfied unless we make those two who cheated on us experience hell itself!”

Isshiki Yuu was shocked by his girlfriend cheating on him, so he decided to cheat on her with the girlfriend of the boy who stole his girlfriend, Sakurajima Touko, who also happened to be the senpai he admires. As part of their plan, Touko proposed to have the greatest possible ‘payback’, and so she started to make Yuu into an attractive and popular man with girls!? His choice of clothes, the conversation topics, etc… Yuu finds himself in the middle of a crazy increase in his reputation with the girls; however, his feelings for Touko only continue to grow. As their plan continues to progress, the relationship between the two of them suddenly grows intimate… What is this ‘payback’ that the two who were cheated on will carry out on Christmas Eve?! What is the conclusion that awaits the two of them!? The curtains rise on a love comedy of revenge!