My Childhood Friends Are Trying To Kill Me 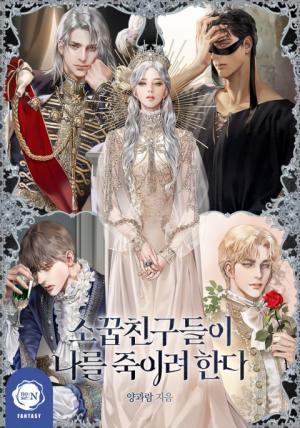 She was not only reincarnated into someone who died in an absurd fashion, but she also took the crown prince’s place and went to the secret neutral territory, where male members of the five imperial families gathered. As a result, her childhood friends know her as a boy.

“Goodbye, guys.” she cried in front of my friends who she would never meet again. That was because officially, she (the prince) was going to die soon!

It was fun spending time with them, but she will never see them again. She hopes everyone lives happily!

After many years, her childhood friends turned heroes who defeated the wild dragon visited her.

“…Was it you? The one who killed my friend?”

“After killing the previous crown prince, the murderer is said to be living comfortably as a princess, right?”

“I will torture you, so much so you’ll wish for death.”

“Answer me. Why did you kill him?”

Of course, they didn’t recognize her at all. No, that’s not the problem… The problem is that her childhood friends are trying to kill her. Wait a second, guys!