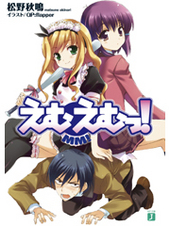 12 Volumes (Incomplete: due to the death of the author)

Due to a certain incident, Sado Tarou has awakened to a bothersome constitution where he starts feeling good whenever females does this and that to him. At this rate, he can’t even engage in a normal relationship! To fix his constitution and to confess to his beloved “Shiori-hime”, Sado Tarou visited “they who grant the student’s wishes”,the Second Volunteer Club, but in there was Isurugi Mio, a beautiful girl who has greatly mistaken herself as god and Yuuno Arashiko, an abominable girl who has served as the trigger to his awakening. The ecstatic traps released from the girls one after another. Do your best Tarou! And you can’t feel good at that!