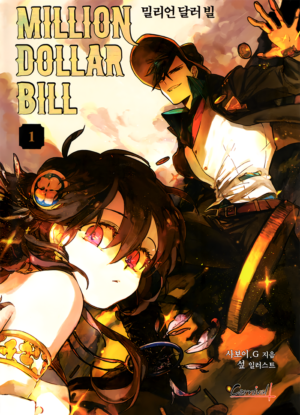 Due to his crime of squandering an alchemist’s gold, Bounty Hunter Bill Withers lost his original body and became an incomplete existence.

As he was desperately trying to repay his debt in order to regain his original body, he comes across some information on a girl with a huge reward on her head.

Bill and Ray, an observer sent by the alchemist, find the girl with some difficulty, but an assassin from the ‘Million Dollar Round Table’ blocks Bill’s path!

In order to survive her harsh fate, the girl offers Bill a deal which he can’t refuse, but···.

People are the ones who start stories, but bullets are what always bring them to an end. A dark fantasy birthed by capitalism, Million Dollar Bill!!