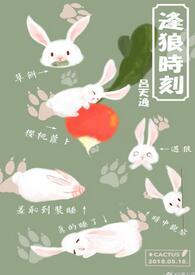 There was once a Bunny who became a high school teacher after successfully cultivating his human form.

Since he took his cultivation very seriously, Bunny was able to conceal his scent perfectly.

One day, a new student transferred into Mr. Bunny’s class. This student was a wolf and a student-athlete. He was tall, handsome, and was born into a wealthy family. But he refused to retrain his wolf-nature, and so this boy was aggressive, mischievous, and spent his time on causing trouble instead of studying and cultivating. Wolf’s parents worried so much for their son that their furs have gone white.

Because he always goofed off during cultivation, Little Gray Wolf didn’t know how to hide his Scent and Mr. Bunny recognised his true form upon their first meeting. It was impossible for a bunny to overcome his instinctive fear for wolves, so Mr. Bunny was so terrified that his legs turned weak every time he saw the Little Gray Wolf.