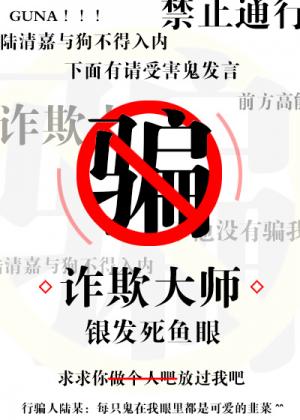 Lu Qingjia, once a slag, provoked someone who shouldn’t have been. He, with great difficulty, saved his dog life on the premise that he would never appear before him.

Unexpectedly, he entered a horror game and had a chance encounter with the other.

The man was in front and to his back was a bloody ghost crawling out of a closet, rushing towards him with resentment to take his life.

The situation was life threatening. Naturally, he didn’t have time for hypocrisy.

Lu Qingjia stepped forward and pulled out the ghost slowly crawling its way and yelled at it: “Why the f*ck are you so slow? With your sluggish and foolish manner you won’t even be able to eat sh*t while it’s hot and you still want to eat people” After yelling, he hid inside the cupboard refusing to come out.

The next time they met, the person said towards Lu Qingjia: “Either come out or just sleep in the well together with that water ghost in your arms.”

Lu Qingjia; “This isn’t a matter of self esteem, it’s just that we hit it off, I want to chat with him all night and let him feel the long-lost warmth”