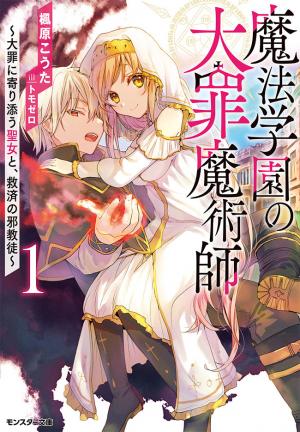 “Say, Lady Saintess? When will you go home?”

In this world, magic has pervaded the world.

However, there was a boy who couldn’t use magic and lived a normal life.

His name is Julis Anderburg.

He is the only son of a frontier lord, and will soon inherit the domain.

Although he has no magical talent, he nevertheless lived a life that was not ashamed of being an aristocrat.

…… Still, for a boy who cannot use magic, this world is stifling.

“If I can’t use magic, why not just use something else?”

Then, he devised a plan.

Furthermore, he was able to master the magic related to the names of the seven deadly sins: pride, greed, jealousy, lust, wrath, gluttony, and sloth.

However, that was in his childhood.

“Four hours is too much sleep!”

Thus, he began to lead a normal life.

However, it is far from normal. He’s a nobleman, but there is something wrong with this routine.

“Cecilia……, you’re a saintess, why are you allowed to be here?”

A goddess who brings peace and blessings to the world.

And she’s one of the highest priestesses of the church that serves her.

If there is one of her in the country, it is said to be a safe existence, but for some reason, she is in this remote region.

From an outsider’s point of view, it’s a bizarre sight. The surrounding aristocrats won’t stay quiet.

One day, Julis and Cecilia were told by their father, the lord of the frontier,

“You two are going to attend the magic academy.”

This is the story of Julis, who can’t use magic but is enrolled in the magic academy, and Cecilia a Saintess, who is the highest priestess, who are involved in various events at the academy!

“Magic is strong?…… Isn’t that arrogant?”