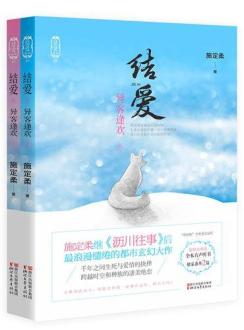 Guan Pipi lives peacefully in C city, works silently, and loves peacefully. Everything seemed so stable and ordinary until a man named Helan Jingting appeared, and her fate trajectory began to deviate…

Unlike ordinary people, Helan can’t see anything during the day but has excellent vision at night. He studies ancient jade, has a special diet of flower petals, and also has a midnight custom of listening to Serenade in E minor while basking in the moonlight.

Seemingly coincidental, the encounter with the mysterious and even strange Helan was actually an unexpected scheme. Helan’s Eight Diagrams are pure yin, while Pipi’s Eight Diagrams are pure yang. If Helan eats Pipi’s liver when she falls in love with him, then he can cultivate the right way to become a “Heavenly Fox”. Helan planted a fragrance on Pipi and gifted her ‘mei zhu‘(1) in order to keep track of her whereabouts. But when Pippi encounters betrayal of friendship and love is when her story with Helan really begins.

Between Pipi and Helan, there is only the helplessness of missing each other, which can be traced back to Pipi’s n number of past lives. Her tragic fate has been imprisoned by Helan’s father’s curse, and she can only accept Helan’s love on the eve of her death in every life cycle. But the journey of life never ends. Can Helan change his fate with Pipi in this life?