Lend Me A Lifetime 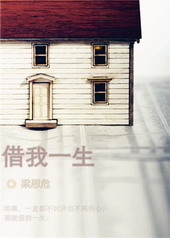 Thinking that he was the man’s true love, he naively handed over his sincerity, only to realize that that he himself was the protagonist of the most disgusting story about a body double.

He was unable to control himself, he wanted to kill off that person who looked exactly like him. Only that the lover he had been with for the past year or so, had raised his gun and shot him dead. In that split moment of pain and cold, the heat of being pierced by the bullet had scorched into his heart, carved onto his bones, so deep that he would never ever be able to start over new.

Yet he still lived; could even empty his heart and step back, could even openly laugh. Just as if nothing had even changed.

But under the rambler roses, the former lover stepped out from the past year, his eyes slowly fixed on him, as he assumed a cold posture to question him. The weakness at the bottom of his eyes hidden behind the thousands of mountains and rivers of the difficult journey.

Gu Han Liang then said: “It doesn’t matter to me if you don’t forgive, don’t believe, or don’t accept. Just let it be as if you lent yourself to me. If you hate it, if you feel sad, then go back at once. I will not force you a second time.”

He didn’t reply, but his heart trembled.

The man’s kiss pressed onto his forehead, and the deep voice sounded again.

“If you don’t hate it and don’t feel sad, then lend me a lifetime.”