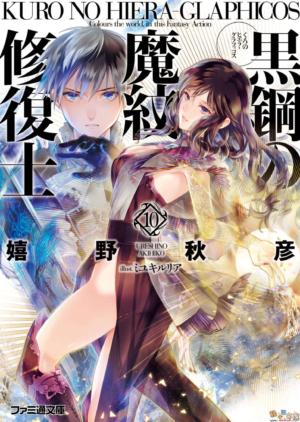 Valeria Costacurta, a 16-year old girl from a formerly prestigious noble family, dreams of being able to someday rebuild her house’s noble status with her own strength. One day, she is chosen to become a Dominas, those that possess the tattooed crest that imbue one with the ability to wield magic. The odds of one bearing such a crest being only one in ten, Valeria accepts, the first step to her achieving her dream now paved right before her.

Being maidens, Dominas are traditionally paired with other females (called Hiera Glaphicos) to protect their purity. But for Valeria her Hiera Glaphicos is a young man known as Dimitar Richternach. Dimitar’s aunt, Orvieto Richternach, assures Valeria that he will never lay a hand on her – because Dimitar only has eyes for older women. To Valeria he is foul-mouthed, brash and tactless. Dimitar sees her as haughty, overbearing, and completely naive.

Their adventures begin with their first assignment, a secret mission to investigate a supposed uprising in a nearby city. Not everything goes according to plan, however, and the scouting mission that was supposed to have been simple at the start quickly turns sour.