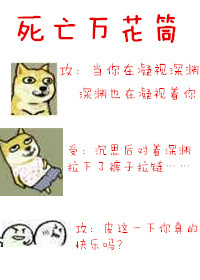 It started off peculiarly; as a first, his domestic cat refused to let him cuddle it.

Lin Qiushi soon found that a sense of disharmony and incongruity began to pervade everything around him.

Then, one odd day, he pushed open a door, and he discovered that the hallway he was familiar with turned into a boundless corridor.

At both ends of this corridor were twelve, identical iron gates.

Ruan Nanzhu said to Lin Qiushi, “When you gaze at the abyss, the abyss also stares back at you.”

Upon hearing this, Lin Qiushi sank into deep contemplation. He then pulled down the zipper of his trousers and aimed at the abyss…