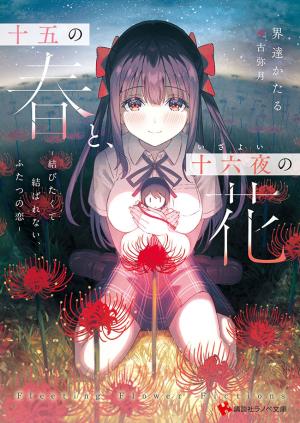 Kunieda Haruki has a smooth start to high school life, even though he struggles with his bit of yandere childhood friend, Mishiro Sayaka.

One day, however, Haruki’s classmate, Senzaki Yuuki, teases him about his relationship with Sayaka, and even presses him for a kiss. On top of that, Sayaka witnesses that scene and gets angry.

The next morning, in an attempt to clear up the misunderstanding, Sayaka has somehow divided into two people!

While Haruki, holding two flowers in both hands, is dragged by the two Sayakas, who are jealous of each other, now they are even more puzzled when they find out that Yuki’s gender has changed to male!

Haruki, who begins to track down the enigma of the mysterious phenomenon, found out that it’s related to the legend “Kareinai Higanbana (Cluster amaryllis that never withers)” of the temple where Yuki lives.

A new age love story mystery revolving around a boy and girl who are fascinated by the mysterious power of Adabana (Non-fruit-bearing flower)!!