I’ve Been Pregnant for 10 Years Without Giving Birth 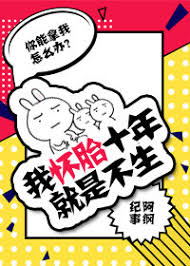 Summary 1) Tang Yuan suffered from a strange illness, so because of this, Tang Yuan pounced upon Xie Yu. A month later, Tang Yuan discovered that Xie Yu was a big shot in the world of tianshi (Taoist Masters), his existence the greatest fear of numerous ghosts. But that big shot was now obligated to marry him, because he was carrying the big shot’s steamed bun.

Xie Yu: “Don’t worry about it. Maybe you’re carrying a nezha (protection deity who was carried for 3.5 years in mother’s womb)?”

Xie Yu: “You really are probably carrying a nezha!”

Xie Yu: “Shall we not just give birth to this child? Since he’s obviously not ready, let’s beat him up!”

Pup: “I will remember this animosity for the rest of my life!”

Shou, Tang Yuan, a heavens-defying genius VS Gong, Xie Yu, with off the charts gentleness

Not a scientific/natural pregnancy, no pregnant belly, the steamed bun is born in the final arc (though the steamed bun often appears), fluffy supernatural story, try not to be too scared.