It Turned Out to be a Useful Fraudulent Marriage 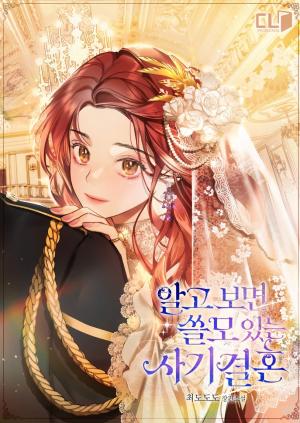 “This is just a fraudulent marriage, young master.”

I had a surprise wedding with this man, Eric Orlean, who was originally supposed to be my brother, after I ran away at night. Originally, it was my mother and Eric Orlean’s father who should have been here now.

My mother, who saw me getting married at her wedding hall, said so with her mouth.

Sorry, mom, but this is all for my family.

My family can’t be exterminated by a psycho stepdad, right?

The flashes went off.

Won’t the title of the newspaper articles that will be published tomorrow probably be like this?

[Eric Orlean had surprise marriage after running away with the supposed future daughter of his father, Duke Orlean, kisses at the chapel!]

It’s a fraudulent marriage. Who cares?

But this marriage didn’t go the way I thought it would.

“Did you go to training?”

“What are you talking about…?”

“I thought I was thinking inside, but it came out in words.”

“I brought it for you. Do you like flowers?”

“Ah… No… If you eat the wrong flower, you will die… There was a time when I was hungry and I ate a flower and passed out…”

“Why are you looking…”

“Because you look good? Just as I feel happy when I see you.”

I threw in a confession.