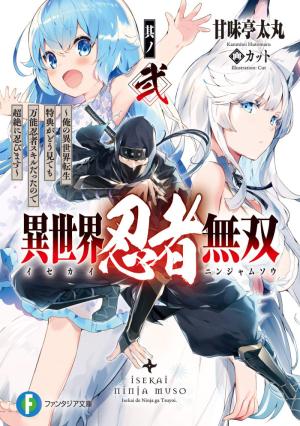 Ninja, dancing wildly in another world——

Kido Otowa, an ordinary working adult who was killed in an accident, is reborn in another world under the guidance of a Goddess who claims to be in charge of Mie Prefecture.

The special benefits granted were —— the power of that “ninja”!

Otowa was depressed by his unusual ability, but——with his shuriken and kunai, he had no enemies. If he rides a large kite, he can fly freely. He uses change and disguise to deceive, and controls the earth, water, fire, and wind with the Five Elements Jutsu —— It’s a very all-purpose and powerful skill?!

“What the hell is your magic…?”

With powers that defy the common sense on the different worlds, Otowa brings wrath of heaven to the evil that is rampant in the world!

The secret arts of the ninja dance in this fantasy world of swords and magic, and the otherworldly ninja action is about to begin!