Interested in the One-Eyed Female General So I Joined the White Wolf Knight Order, but It Turned into a Harem?! 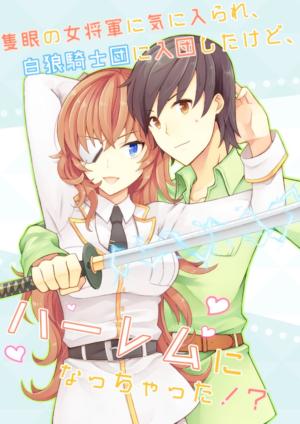 ―――The wind-manipulating female general Ortasia is an extremely cruel person. Just saying her name would cause even those from her own country to tremble in fear. Then came a day that the invincible Ortasia had to finally pay for her sins on. Her comrades, who were scared of even her war-mongering existence, set a trap for her. It was then that she lost her right eye. Barely escaping alive*, she escaped to a small cabin in the woods. Meeting the young lumberjack Shingen who lived there, she swore――― with that boy she would start a fierce storm to get revenge and take back the country―――

Wanting to become a knight like the one he admired, the lumberjack joined her and learned that the majority of the White Wolf Order were actually women. And with that he came to this conclusion:

“Hey, former commander! You acted really cool while you were explaining all of that but, really, you were just creating your own harem, weren’t you?!”

And with that our serious-sounding, yet at the same time not-so-serious story begins!!