I’m a Fake Saint But the Gods are Obsessed 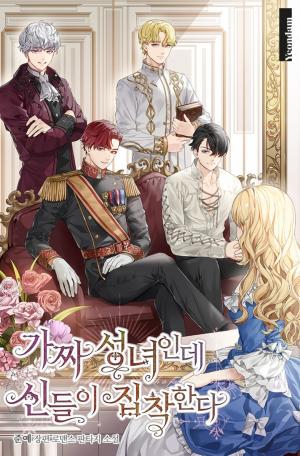 Five years later, when the real saint would appear, it is said that I, the fake saint, would die.. ‘Let’s stay still. Isn’t this an opportunity?’ If one collects the salary that falls on the saint, it’s enough to be at the least a building owner! So I was planning to run away after acting as a saint in moderation…However the conditions of the Gods are strange?

[Hesed, the god of knowledge, examines my body and breathes a sigh of relief.]

[Omni, the god of benevolence, declares that he will kill those evil people who have treated me with profanity.]

[Odyssey, the god of love, instigates arrogance next to him.]

[The god of destruction, Ciel, is shedding tears, worrying that if I was hurt.]

And there’s something wrong with the potential protagonists, who were unsympathetic to the fake saint in the original work!

“Why do impure thoughts come to mind when I think of you?”

The High Priest, whose role is to be the watcher, wouldn’t come to me even if he had time,

“It was you who wanted the place of the Crown Prince.”

The Crown Prince, who had disliked and avoided me, proposed to me and said,

“Tell me what you want. I’ll give you my head if you want.”

The Lord of the upper levels, who is said to have no emotions, keeps on trying to give me something when he sees me! The mastermind behind the destruction of this world, says he will help me rather than kill me!

No, I’m a saint, the world is going to be doomed, and I’m not interested! Just let me be the building owner as per my original goal!