I Was the Seventh Prince When I Was Reincarnated, So I Choose to Master Magic as I Please 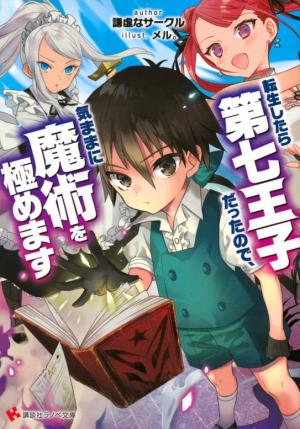 ※Now on sale from Kodansha Light Novel Bunko, manga is updated every Saturday at Magapoke.

A certain poor magician died too quick in a duel, and he was reincarnated as a child of royalty named Lloyd as he realized it.

Lloyd, who was told by his parents and brothers to live as he likes because he is the seventh prince who has nothing to do with the throne, work hard on the study of magic that he could not be satisfied with until now.

With a lot of time and assets, steady efforts, knowledge of the previous life, and a blessed environment, Lloyd learns magic at a terrifying speed.

…… However, he didn’t try to use that power for combat, and he was passionate about experiments and research, giving priority to his intellectual curiosity to the end.

As a result, the evaluation of those surrounding him becomes preposterous, but …… Lloyd didn’t care about that, and he mastered magic in his own way.