I Was Connected to Earth’s Black Market From Another World With The Skill [Market]! 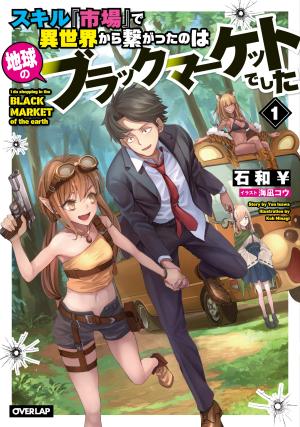 Takefu Yoshiaki, an ordinary office worker, is summoned from modern Japan to another world. However, Yoshiaki, who was only caught up in the “Hero Summoning”, is branded as incompetent by the king and is punished!

While the heroes are attacking together, Yoshiaki decides to use his special skill, [Market]! And then there appears ― Simon, a shady looking arms dealer from the Earth (and a drug addict)!

After negotiating with Simon, Yoshiaki somehow manages to escape his predicament with a pistol (a Spanish copy of the M1911) and an automatic rifle (AKM).

With nowhere else to go, Yoshiaki finds himself helping a young dwarf girl named Mirril…?

Yoshiaki’s encounter with Dwarves, Beastman and Elves, all of whom have been oppressed by humans, forces him to make a decision. He will make full use of the power of the [Market] and arm the sub-humans with modern weapons from Earth!

The legend of the man who would later be known as the Demon King begins now…!!