I Want to be Your Tears 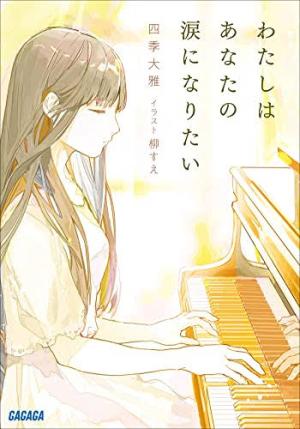 This was a story that began and ended with tears.

Yakumo Saegusa, a boy who lost his mother to a strange disease, the “Chloride Blight,” in which the whole body slowly turns into salt and crumbles, met a girl in the music room.

She was a beautiful and gifted piano player named Yuzuki Igarashi. Her delicate fingers were capable of both piano and wring bullies. She struggled to live up to her mother’s excessive expectations in the dark while presenting a strong front. Yakumo, who had seen Yuzuki in all her various forms from a distance closer than anyone else, was unknowingly drawn to her.

Graduating from elementary school, Yuzuki grew more beautiful and charming, and by then, became the object of people’s love and admiration. By the time she entered high school, Yuzuki, already a professional pianist, left for Italy to learn her craft. Yakumo, acutely aware of the overwhelming difference between him, a nobody, and Yuzuki, an international pianist. Eventually, he began to write a novel.

His reunion with her came suddenly one day—and that reunion would come to change his destiny forever.

This was a story that began and ended with tears.