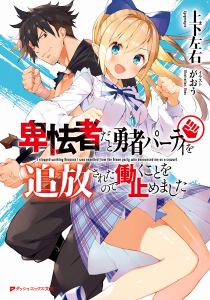 Nicola, a martial artist that wields cowardice as a weapon, was kicked from the Hero’s party.

Betrayed by his comrades, he decided that he’ll never work again. However, this freeloader was forced to become a teacher at Shanoa Institute. A destined encounter with a frail girl named Alice. In a world where a person worth is determined by their strength, she was deemed weak. In order to change herself, Alice begs the coward Nicola to take her under his wing. No rules!

This is a coward’s rise to power―A battle fantasy is about to begin!