I Refuse To Reject His Proposal 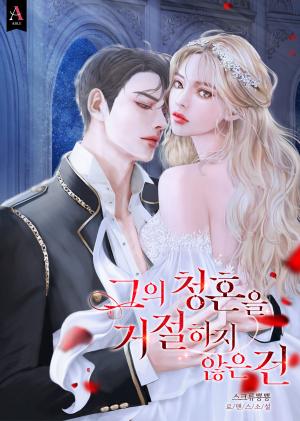 The moment I fell off the cliff, I returned to the time before all misfortunes began. Brother Ethan’s terrible death, the fall of my family. And a violent pheromone shower every day.

In order to prevent all those misfortunes, Ethan’s political marriage must be ended first…

By the way, what kind of situation is this?

“Then I’ll take you instead of him.”

Is this person crazy?

Eileen was in tears and forcibly calmed herself down despite her arguments. The opponent was Archduke Rihast. The incomparable dominant alpha whose linage came directly from the imperial family.

“Why me? No matter how big the title of the Archduke is, kidnapping in broad bright daylight shouldn’t be pardoned at all!”

“It’s not kidnapping, it’s a proposal. Please marry me.”

A threateningly tall and hard body approached Eileen as if it were pressing her.

“Having the right to refuse?”

It was clear that Ethan would get married if Eileen refused him like this. It’s going to be the beginning of another misfortune.

The previously terrible misfortune had to be prevented somehow

Even if a new misfortune comes.