I Raised the Villains Preciously 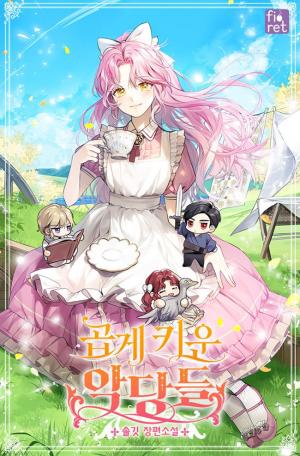 I will become a nursery teacher for the children who would become the future Black Sorcerer, the Heads of Dark Guild, and Psychopath Emperor. I didn’t want to get entangled up and sneak out of the nursery, but I decided to raise the poor little villains with full sincerity,

“Teacher, are you leaving us behind?”

“If you look at this handsome face a little more, you won’t be able to win.”

Masha, who took off his dress and wore a neat uniform, grew up as a narcissistic adult.

“Teacher, the more dangerous I am, the more likely you will not take your eyes off of me. I’m weak at the poor things.”

Although he is the Empire’s number one in rough and fierce ways, Jeremy, who is strangely soft for Hannah, but his way of affection was little off.

“I’m going to listen to whatever you want. Whatever it is, whatever it is for. Instead, the teacher should stay with me.”

Ian, who became emperor, and his actions, which are still unknown, is Ian really a pushover and foolish? If so, is he hiding something else?

I think I raised it properly, but I think there’s a bit of a problem?

“I have a lot of impure things I want to do with you.”

Hello, Pope, what’s wrong with you?