I Need Someone to Stop My Older Brothers 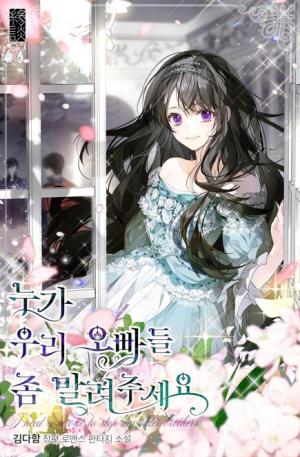 I only went to calm the disturbance in front of my house, but the one I encountered was the Demon King that I punished,

And unfortunately, I was falsely accused of being the demon king and died in the hand of the subjugation team.

‘I’ll kick your ass, Pamel Asinov! I’ll make you shed tears from both of your eyes!’

Among them, the worst one was the hero, Pamel Asinov, who drove me to death as a Demon King!

But when I pleaded to take revenge, I opened my eyes, 500 years later!

Pamel’s been dead for a long time, and the ‘brothers’ who came one day…

“Purple eyes. It’s not a color that anyone can have.”

“Yes, you were. Because you are the granddaughter of Archduke Asinov.”

“… the granddaughter of Archduke Asinov?”

Of all people, I’m the daughter of ‘that’ Asinov? It’s nice to live a peaceful life, but I was born an enemy’s blood!

‘All the brothers in this house have a habit of hugging people.’

This shitty family. I have to hate them, but why do I keep getting attached to them?