I Just Want To Disappear 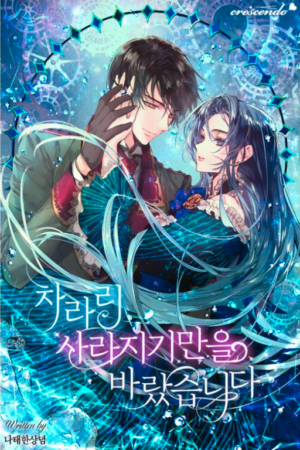 “The Blessing of Heaven”, “A Prodigal Genius”, “Edenberg’s Dog”

To win the love of her adopted parents, Elena dedicated her skills to the Edenberg name. If anything posed to harm the family, Elena would even kill the people she loved. At the end, Elena’s “family” chose to sacrifice her. No longer having the will to live, Elena’s dying wish was to destroy the Edenberg family name. Time reset and Elena now has a chance to do just that with the help of the mysterious Emperor who heard her wish.

A family not connected by blood but with ink. I do not desire these abilities of mine. I only want love from them however, they cruelly used everything I had and abandoned me at the end.

I was offered as a sacrifice.

Before death approached after I was sacrificed, I met him.

“You have no will to live.”

He breathed in the scent from my neck as if it was the most fragrant thing.

Those were the last words I heard in this life. I thought that moment was extremely awful. If only I was allowed to live one more time. Then. This time I will throw you people away first. Like a miracle, I returned to the past.

I met him again.