I Got Married to a Cursed Wolf 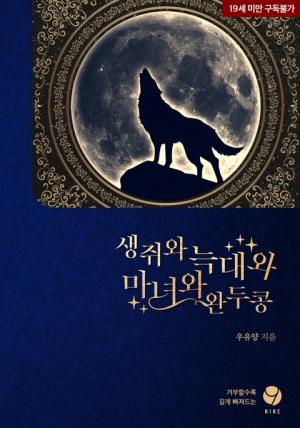 She used to be a maid who read books for a girl, but for some reason she disguised herself and married a man she didn’t know.  However, from the first day she arrived at the castle, until a month has passed, the husband did not appear, and instead she gradually found out that an unknown person was hovering around her…

I found out that the man’s true identity was… Was it a dog?

“Can’t you spread your legs a little more?”

The wolf knelt and looked into my thighs as if it were a gold mine. I closed my eyes tightly, but I couldn’t move closer to the wolf’s tenacious gaze that I could feel even when I closed my eyes. I just wanted this time to pass quickly. I felt like sweat would form on my thighs, so I wanted to tighten my thighs.

“Put up the skirt a little more, okay? “

A very scratched voice. I opened my eyes and looked down. The wolf, who was burying his head in the width of her skirt, noticed my gaze, he pulled his hair out of my skirt and looked at me and scolded me.

“I can’t see well. you are standing .Can’t you sit down?”

“What are you trying to do in such detail? It’s over now.”

“You said you’d show me. After making a promise, why are you talking with one mouth?”

“Why not? We are already a couple.”

In addition, he narrows his eyes and even asks.

“You should have done this as soon as you arrived, you know?”

This happened five months after I became his bride.

“You have abandoned your duties until now.”

The wolf weighed me down with its heavy body and whispered softly.