I Don’t Want This Reincarnation 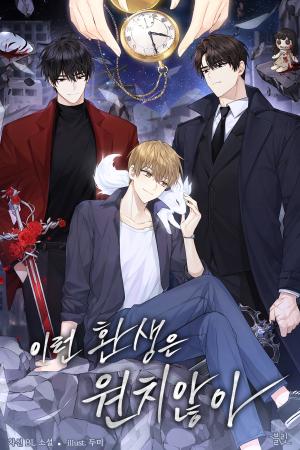 A villain with an angel’s name, Cheon Sa-yeon’s loyal dog and an unfortunate supporting actor who died on his behalf, Han Yi-gyeol.

In order to escape from Cheon Sa-yeon and survive, he had to use the original protagonist Ha Tae-heon.

But Ha Tae-heon, who thought it was a lifeline, was infinitely indifferent to him. Rather, Cheon Sa-yeon showed interest.

Besides, something strange happened.

The events that occurred in the original story had been advanced, and the gate and monster ratings had risen. Even people who were ‘different’ from the original.

The original version I was trying to use was wrong.

Hopefully, you are really.

“I just thought I knew how to clear it… Isn’t that all?”

Cheon Sa-yeon, who was walking to the basement entrance, looked back at me. He replied with a soft smile.

“What does that mean?”

“It means that we are in a position to hide each other’s hidden cards and look at each other.”

Hidden card. I tried not to react to that word, putting on a calm expression.

“Strictly speaking, it was discovered, not reported.”

It was tiny that Cheon Sa-yeon gave me an interesting look and said, “But not bad. It seems like a lot of fun, doesn’t it? Predicting, discovering, and using each other’s hidden cards.”

In fact, there was a lot of interest, but I shook my head in denial, thinking that I wouldn’t be able to see a good one if I dared to show it.

“That’s sad. I wanted you to come over.”