I Became The Mother Of The Male Lead’s Children 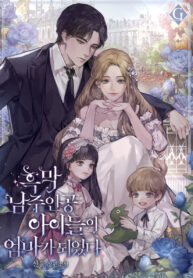 She became the wife of a male lead inside the novel that she couldn’t finish.

She was also the supporting character who died out of jealousy of the relationship between the male lead and the heroine.

Daisy, who didn’t want to face such a dark future, came up with a condition instead of marrying the male lead, Carlyx.

“Please divorce me in two years.”

During these 2 years, I will revive my family, gain honor and wealth, and then get out!

After signing the contract with him, Daisy began to take care of the family.

However, thanks to Carlyx who never took care of the family, the servants were working half-assedly, so Daisy decided to fix it.

In the meantime, she met with Carlyx’s children…

Oh my gosh, so cute! For Daisy, who bounced here and there to maintain the family for two years, those cute children were like a healing.

As she loved the children and got closer to them, Carlyx’s indifferent attitude seemed to change.

“Show me your cheek.”

Chu! Plump lips softly left a trace on her cheek. Carlyx kissed me on the cheek?!

Can I really get out of this house safely in two years?

Soon after, Carlyx, who had to go to the battlefield, came with a broken arm.

“I want to spend more time with you.”

I’m sure there was nobody in this empire who could hurt him, though?