How Does It Feel To Be In B-grade Horror Game 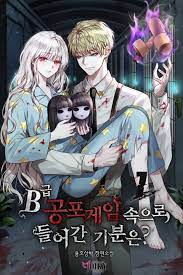 「Welcome to the horror game .」

There was a long description of the game on the transparent window.

As if in disbelief, she glanced down the dark hallway, bewildered.

When Fidelis opened her eyes, she was in the arms of a man whose eyes glued to her. The man gently touched her eyes and opened his red lips.

“It’s too cold to just lay on the floor.”

“Ah, thank you-” A white window appeared to the side of the man before she could even speak.

As I tilted my head while looking at the letters that appeared behind me, a shocking word came to my mind.

She blinked and looked at the transparent screen window and the man alternately. He smiled softly and trimmed Fidelis’ hair.

Ah, I think even a psychopath is hidden in this game…

Fidelis, unable to say that, vigorously shook her head.