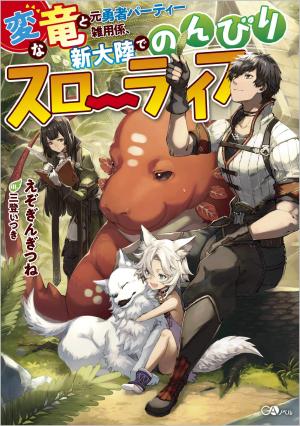 The Demon King was defeated. The world was at peace. And so Adventurers were losing their jobs.

And though Theodore was the backbone of the Hero’s party, and worked as a choreman who would take any jobs, he was not immune to this change.

“I have enough money, so maybe I’ll just live a slow life in the countryside.”

Theodore thought. But then his old friend the guild master said,

‘Could you join the investigation in the new continent?’ It was a request.

If people needed his help, then joining would not be a bad thing.

And so Theodore decided to go to the new continent.

On the way to the new continent, Theodore tamed a large, and strangely shaped young dragon.

And with this dragon, he heads to the new continent.

With his ‘Appraisal’ skill he is able to see the quality of the soil in an instant, the ‘Crafting’ skill allows him to create a mansion all at once, and the ‘Taming’ skill can even tame a dragon.

With these cheat-level skills, Theodore’s comfortable slow life on the frontiers begins!