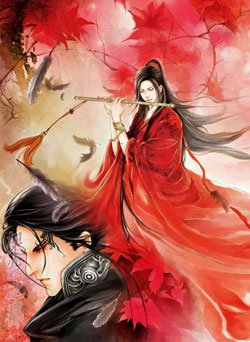 In the prehistoric times, the 200,000 year of Tian Yuan, the flower deity Zi Fen dies after giving birth to a daughter. Before she passed, she fed her daughter the Unfeeling Pill, ordered her subordinates to keep the girl’s birth story a secret and to imprison her within Shui Jing for ten thousand years. The girl’s name is Jin Mi.

Four thousand years later, the Heavenly Emperor’s second son, the Phoenix Fire Deity was entrapped by someone and mistakenly entered Shui Jing. He was saved by the ignorant Jin Mi. After living together for a hundred years, the Fire Deity gradually developed feelings for Jin Mi. Who would have thought that he would be attracted to Jin Mi?

In between the Heavenly World and the Devil World, there is an immeasurably deep River of Forgetfulness, where the war between the Fire Deity and Night Deity finally erupts.