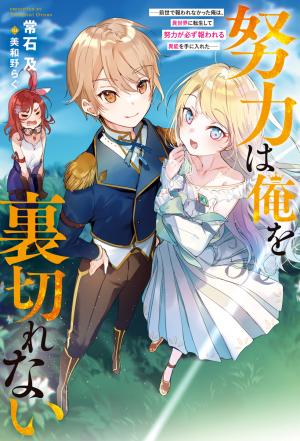 A youth whose effort wasn’t rewarded lost his life in a traffic accident, and reincarnated as Eberhard, the eldest son of the House of Margrave Fahrenheit, a leading nobility of the Heiland Empire in another world.

Magic and the like existed in the world he reincarnated in, and so did status. When he checked his status, he found that he possessed a unique ability called Perseverance Makes One Stronger, an ability that could make him stronger the more he put in effort. Not rewarded even if he put in effort in his previous life, the youth rejoiced as effort wouldn’t fail him in this life!

And in this life, he was happily spending time with his cute fiance, Lily, and his childhood friend and blacksmith’s daughter, Mayle. However, an evil clutch is approaching and—

The story of a youth who could infinitely grow through making effort starts now!