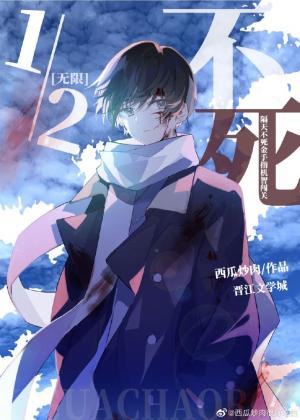 1. Yan Wei entered a black tower that disappeared into the clouds and accidentally entered a world inside the tower that was filled with all sorts of instances.

In the instances, there were puppets leaning over to kiss a statue, paintings of people without eyes, a pale and dishevelled female ghost with a mouth filled with blood….

Each floor was a level; if you don’t enter, you die. Only those who reach the top can live.

After Yan Wei thoroughly understood the rules, he found that he had a skill called “Half Immortal” —- As long as he was in an instance, he would acquire an immortal body every second day.

2. Yan Mingguang who was ascending the tower took off his glasses and held a cigarette as he leaned against the wall watching the young man not far away slowly approach the boss.

The young man was calm and composed. With one hand in his pocket, he used his other hand to grab the boss’s hand and carefully examined it. His clear voice carried nonchalance: “Don’t move. Let me see what clues you have on you……Hey, stop struggling. You can’t kill me anyway……..”

The clock ticked past midnight——–

The young man’s calm expression changed immediately. He looked at the boss with eyes filled with fear and turned and ran towards him.

Seeing that the boss was now charging over, Yan Mingguang tossed his cigarette aside, frowned and said coldly: “Let go.”

The young man clung tightly onto him: “No! Save me!!!”

Yan Mingguang who found that he had already crushed the boss’s head, “……..”

3. One day, while the instance was being broadcasted.

The players who were watching the broadcast found that the thigh-hugging, weak and useless player Yan Wei had suddenly appeared before the boss all the other players were trying to avoid.

The next moment, the young man chased after the boss, shouting, “Stop running, I won’t be too mean!!”

This was different from what they had in mind?