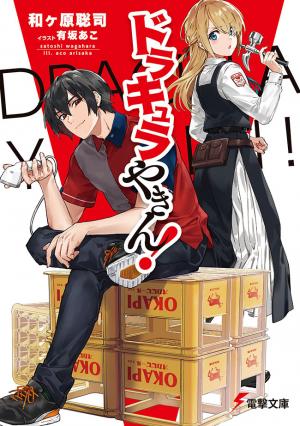 Vampires can only go out at night, so he decided to work the graveyard shift at a convenience store in modern Japan!?

Vampires are creatures that turn to ash if they are exposed to the light of the sun. He can only move around at night, but he’s actually been able to live quite comfortably in modern times.

Why is that, you ask? That’s because there exists the concept of a “graveyard shift”.

Toraki Yura is a vampire who lives in the modern age. He works at a convenience store in Ikebukuro (graveyard shift only), and lives in a semi-basement apartment that gets next to no sunlight (blackout curtains are a necessity). For the sake of going back to being human, he lives his life on the straight and narrow everyday.

However, after saving a blond-haired beauty from a drunkard, he finds out that she is Sister Iris, a nun who found her calling in exterminating vampires! Moreover, his natural enemy ended up as an unwanted guest in his apartment!? What is going to happen to Toraki’s peaceful vampire life!?

A slice-of-life fantasy brought to you by Wagahara Satoshi, author of the “Hataraku Maou-sama!” series!