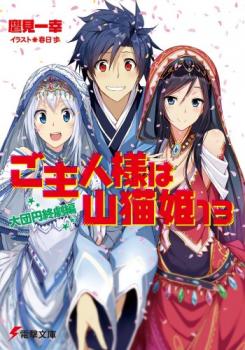 Shin’ya Seirin, the noble-born good-for-nothing, living in the Engi Empire.

The youngest princess of the Shimur tribe, Mine.

Still thirteen, innocent and demure – except not at all. She is actually a spoiled brat of a royal, who throws a tantrum every time something doesn’t go her way. Nickname “Wildcat”. For some reason really likes Seirin and runs him ragged daily.

Then, just when poor abused Seirin finally gets used to his new job, supposedly peaceful Shimur tribes declare war on the Empire. Now he’s forced to choose between two sides of the conflict. Can this become the first step on his road to greatness?