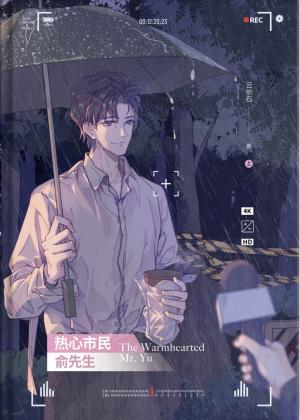 This is a warm story that happened in the entertainment circle.

The story began on a rainy night. When the “Good Samaritan” Mr Yu lent a hand to a drunk “middle-aged uncle”. He was captured and interviewed by a small local television station, commending his willingness to help a person in need and saying how he was a good model to the citizens. The next day, Shen Yu’s name, an actor who had been in the industry for many years and yet still remained unpopular, became a hot search online in a way that he had never imagined possible. His awkward yet polite smile was screenshotted and accompanied by various trendy emojis and memes, made into sticker packs.

…On the top floor of a luxurious hotel, a certain someone, who had just awoken with a hangover, was browsing through Weibo with widened eyes, “Who the hell wrote this article?! Is that reporter blind?!”

His assistant asked, “Boss, shall we thank this Mr Yu?”

“Impossible. Hmph, there’s no one who can make me acknowledge myself as a ‘middle-aged uncle’.”

Both the top and bottom are treasures, they finally found each other in their long and endless life.

All the characters depicted are fictitious. Any resemblance to a person living or dead is purely coincidental.

After a lesser-known but tranquil veteran actor, Shen Yu, picked up a weird person from the same industry on a rainy night, he happened to be captured and interviewed by a small local television station as a Good Samaritan. He appeared on the hot search in a way that he had never thought of being possible. From then on, it was as if his life was on fast-forward, different types of opportunities were rushed to his feet. And, the luckiest thing, yet the most shocking, was that the weird drunk he had picked up the other day was actually the sharp-tongued, two-faced, and internationally famous director who he had been idolising for years — Wait, and this famous director seemed to be planning to woo him?