God Is Hungry for Games. The Ultimate Brain Battle of a Boy Who Challenges the Gods (LN) 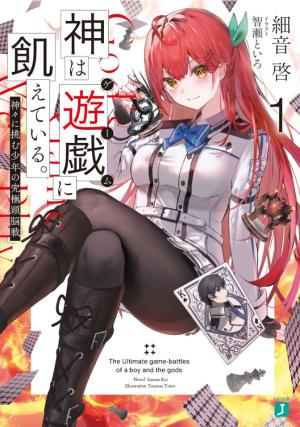 The Ultimate Brain Games, “Play of the Gods” made by their supreme grace, Gods, who had too much spare time probably.

A former God, Leche, who woke up from a long slumber; declared unto the world:

“Bring forth the person who is the best in Games in this era!”

The test given to the humankind was to win 10 games against Gods.

There is yet to be a Victor throughout this vast human history.

Fast forward to the modern time;

On the behalf of the whole humanity, he was given the task.

The task to challenge and win at brain battles with these Supreme Gods.

But, Faye was no ordinary boy.

He is the boy nominated as the “best rookie” in the recent years.

The “Play of Gods” he is about to challenge might be too difficult.

Indeed, there is no human in history able to succeed. Well, the reason is quite obvious.

God is capricious, very unreasonable, and sometimes even “Absolutely Incomprehensible”.

But, because its such a game, “Its a waste to not have fun and play from the bottom of my heart!”

And thus begins the Ultimate Brain Battle of a Genius Game Boy, a former God (who happens to be a girl) , and friends!