Give You My Heart 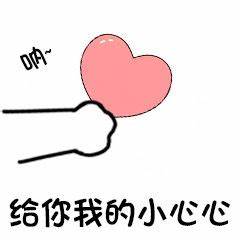 The three and a half-year-old Lin Cheng was rubbing a cat at home when mother Lin ran in, “Cheng! Your Aunt Xiu has given birth to a baby!”

Lin Cheng opened his eyes wide, given birth to a baby?

Lin father held and carried him up, and so Lin Cheng had his wish to see the younger sister fulfilled.

Lin Cheng pointed at the small round dumpling, “You shaved the cat’s hair!”

Cheng blinked, staring at the saliva flowing from the tender and fair dumpling. This is, this is……. The hairless cat?

Lightly poked it with his finger, Cheng breathed and smiled foolishly.

The cat was out of favor! Cheng liked this hairless cat more!

A collection of snippets depicting the sweet evolution of two childhood sweethearts.