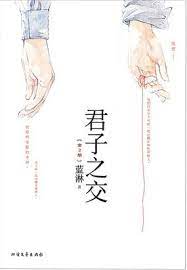 “If you deceive someone to make them happy, you have to make sure to deceive them for the rest of their life.”

The cowardly good-for-nothing Qu Tongqiu regarded the dashing president of the student union Ren Ningyuan as his idol. He worshiped and revered him, happily becoming his devout follower.

Later, Ren Ningyuan took on the part of Qu Tongqiu’s guardian angel who not only protected Qu Tongqiu but also introduced him to his future wife and even took care of his shotgun wedding without expecting anything in return. For Qu Tongqiu, meeting Ren Ningyuan was the biggest blessing of his life.

“It’s all fake,” somebody whispered.

The ugly truth behind the illusion was gradually uncovered, as Qu Tongqiu’s life crumbled to pieces, and the decade-long deceit of his “friends” came to light.

What made Qu Tongqiu finally collapse was the realization that the culprit behind his worst nightmare was Ren Ningyuan – the man he had admired so much.