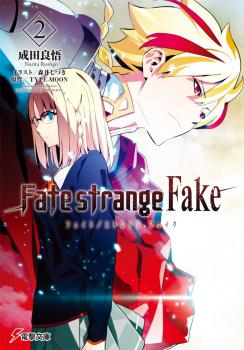 This novel is a spinoff of Fate/stay night, by Narita Ryohgo, set during a war that occurs a few years after the conclusion of the Fifth Holy Grail War.

The stage: the city of Snowfield in the western U.S., far from Fuyuki. There, a “false Holy Grail War”, quite unlike the original Holy Grail War, unfolds. There were those who had been keeping an eye on the auguries of the Holy Grail in Snowfield. According to an investigation by the Mage’s Association, the Holy Grail War system in Snowfield was an imitation of the one in Fuyuki. What’s more, the system was incomplete, leading to the exclusion of one of the seven classes and the selection of beings as Servants who ordinarily could not be summoned. It was, verily, a strange fake. As an organ of the U.S. government executes its various plots, the Servants are summoned one after another—