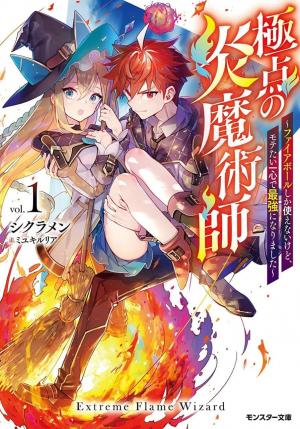 “From today onwards you are no longer my son. Get out” Being born into a noble family that is aiming to become the ‘strongest’, at his aptitude ceremony held on his 12th birthday it was discovered that Igni could only use fireballs. Igni who can only use beginner level magic was kicked out of his house.

With no where to go and without much magical ability, Igni is scraping by through life. However, one day he has miraculous reunion. “What? Is that Igni there?” “Gr-grandpa!?” It was a reunion with his grandfather, the man who was once called the strongest [Kyokuten] but was banished from his noble family because of his excessive womanizing…! “Grandpa! You said strong men are popular, but I can’t be strong!!” “Igni, listen carefully. Strong men are popular but, hard-working men are even more popular!!” “Grandpa! I’ll try my best!!!” Igni whose parents who banished Igni from the house, didn’t yet know of his obsession with being popular under the guidance of the strongest [Kyokuten] magician…!

“Igni that magic!” “This? It’s a fireball” “With this you can aim for [Kyokuten]! Come back here!!” “Nobility isn’t popular” “What are you saying?” This is a story where a young magician becomes the strongest by honing his skills all in order to become popular.